Crimplene & Cardin in the Swinging Sixties ♥

First off, I have become mildly obsessed with this new fabric that I have discovered, courtesy of my university research. I find it amazing that this seemingly unattractive, coarse, stiff fabric could have caused such a sensation, and impact on the clothin of the last 60's. Crimplene was developed by ICI fabrics (Imperial Chemical Industries) in the early 1950's, and slowly gained popularity, due to its wearability, durability and crease resistant nature. The fabric itself is pretty crazy- it's thick and has a highly textural nature; so can create highly scultptural pieces. This worked particularly well with the A-line dresses that characterised the look of 1960's. Some of the resultant garments are, pretty kitsch and garish to say the least, but to me, that just makes them so much more interesting (especially as a budding fashion historian).
The shape of the 1960's is not only due to the emergence of some snazzy new fabrics, but due to some forward thinking designers. Pierre Cardin is perhaps my favourite of the era: his radical garments were extreme, progressive and modern- echoing the space race culminating in the moon landing of 1969. This was an era of change, of looking forward to a bright new future, ofcourse this is transparently reflected in the fashion of the period.
Here are some pictures I've come across in my Research: 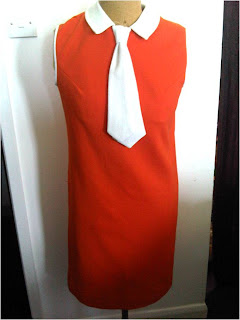 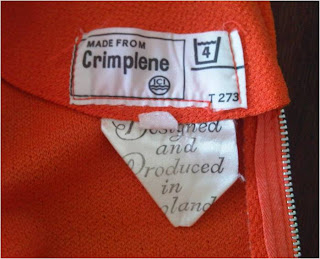 The Dress which I was given for my analysis based presentation. Hmm tricky! 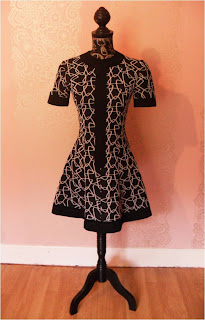 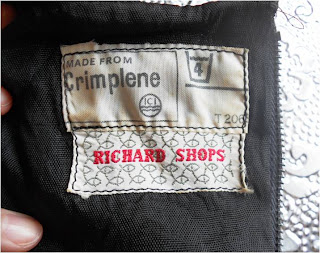 A dress I nicked from my lovely grandma's closet :) As you can see it is crimplene and a similar style. This pleased my tutor no end!
Research from British Vogue  ♥ 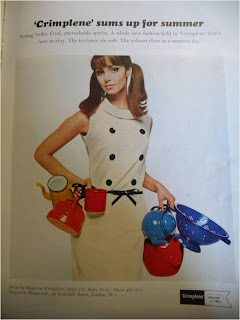 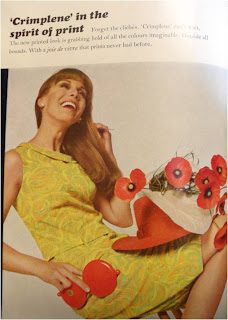 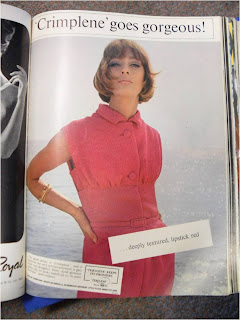 Crimplene Ads are from March and August editions of British Vogue, 1967.
The Mini and A-Line Shift ♥
Crimplene and the mini-skirt are two peas of a sixties pod. They were both crucial to the stereotypical aesthetic of this era, and worked effortlessly alongside eachother to create the iconic stiff little mini. In many cases the mini was combined with an A-line shift style of dress, such as the examples below. 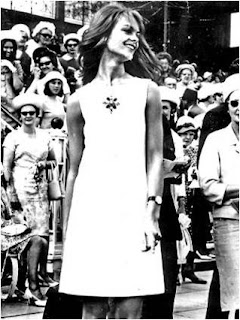 British Model Jean Shrimpton, Melbourne Races October 1967.
This is seen as a pivotol event in the mini-skirt's history: Read all about it here:
http://www.milesago.com/Features/shrimpton.htm 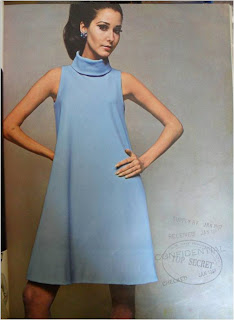 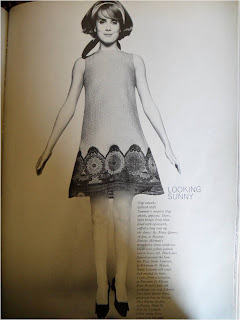 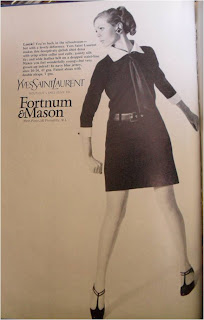 Not strictly relevant, but I just loved the dude on the left, so I had to include it...
For the laughs: A hilarious old crimplene commercial:
http://www.youtube.com/watch?v=jNBoJZN-KIk&feature=player_embedded
As my research progressed I realised that not only did crimplene work well with the stiff mini skirted designs of the sixties, but it as it gained popularity it began to influence designers, and thus impact on the styles of the era.

Mary Quant: ﻿THE iconic designer of the swinging sixties ♥ 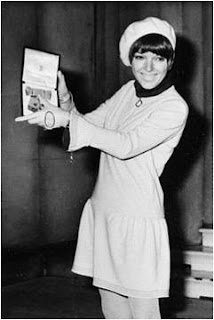 Quant recieving an OBE for services to Fashion in 1966. Wearing one of her own designs. Mini's in Buckingham Palace?! OH MY! 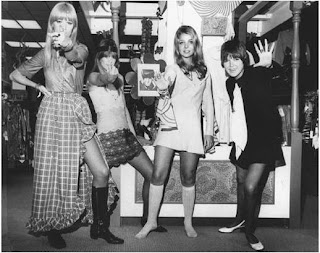 With three of her muses showing off Quant pieces, 1968. 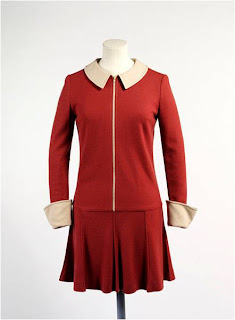 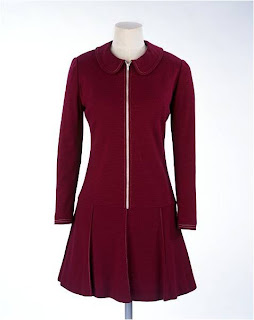 Skater Dress, Mary Quant, 1967.
Thhe three above images are from the V and A archives: http://collections.vam.ac.uk/. Essential reading for any fashion/art student, but still well worth a rummage if not!
Pierre Cardin ♥ 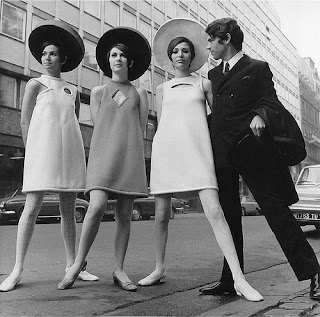 With three of his house models in 1965 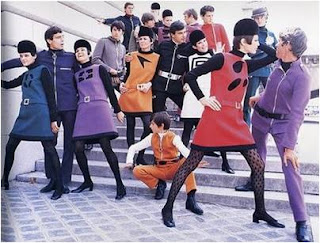 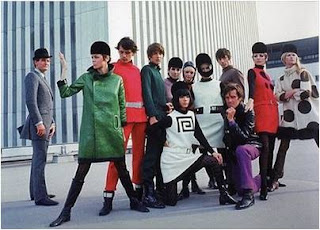 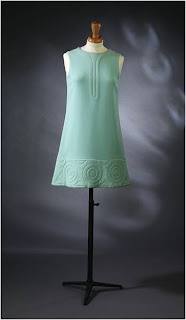 A-line Crepe Shift Pierre Cardin, 1968.
André Courrèges ♥
The designer of the mini skirt is an ambigious subject, I believe that Courrege was the first high end designer to integrate the mini succesful into his collections and present it as the only wearable length, but Quant was the person who introduced it to the street, which was very much a big part of the sixties look. 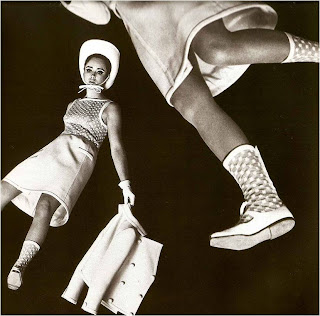 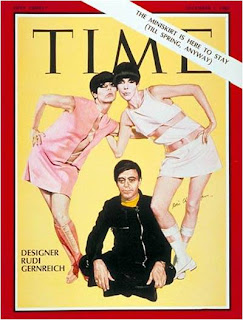 Gernreich was the first designer to use unconventional plastics in his designs, such as PVC and Acrylics.
This is him on the cover of TIME, December 1967.

PVC panel dress, Rudi Gernreich, 1967
﻿
These styles are so interesting, and relevant to today's fashion; you can see evidence of Gernriech's panelling in the dresses of today. The styles of the sixties were not only iconic, and crucial to the shift in twentieth century styles, but are timeless- a mark of great and inspired design.
♥
Posted by Amy Maskell at 11:03 No comments: